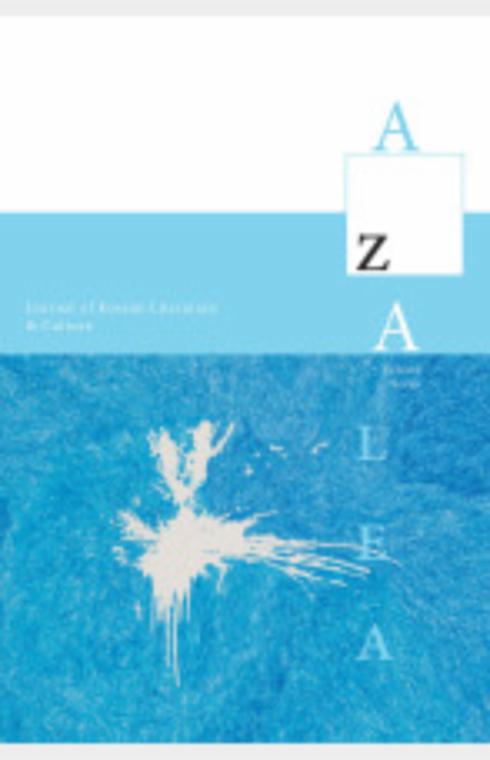 In lieu of an abstract, here is a brief excerpt of the content:

What a range of literary and visual work lies before you, O most fortunate readers of Azalea Volume Seven: poetry, prose, images! There is an extended conversational dialogue between the scholars and cultural theorists Kim Uchang and Karatani Kojin, as well as an excerpt from Korea’s first ancient novel, if the 17th century Kuunmong, Nine Cloud Dream counts as ancient, having appeared several decades before Daniel Defoe’s first Western novel, Robinson Crusoe. We also have contemporary fiction, poetry, and flash fiction; visual work, both apart from text as well as embedded in it, shaping it; and voices ranging from the Korean American writers gathered together by Heinz Insu Fenkl and Minsoo Kang, to a dog’s own words in the story “Frank & Jindori” by Christine Hyung-Oak Lee. Jack Saebyok Jung’s introduction and translation of Yi Sang’s (1910-1937) “Paradise Lost” prose/poems gives us yet another perspective on one of twentieth-century Korea’s most irreducibly modern writers. If all this were not enough, there is a section of, by, and pertaining to the undersigned, the journal’s Editor, with reflections of his own variously framed encounters over the decades with the people, culture, and literature of Korea.

As some may have noted, Azalea does not pursue an established theory line; or I do not. In translating Korean poetry into English, I have been aware of the gravitational pull of the poem’s shape in the original language, and of my intent to remake the poem, like a clay pot, in the other, English. To push the metaphor just a bit, I do not seek to break the original poem down into its parts, into the clay bits or the glaze constituents, then reconstitute them all over here. I like to try to make another pot, just like the first one, that will hold an equal amount of interest, interpretive gesture, sense of volume, and space as the original.

I might turn here to Robert Hass who, in his Foreword to Joseph Cadora’s new translation of Rilke’s New Poems from Copper Canyon Press, suggests that a translation may have a certain advantage over an original poem, as it reminds the reader that the “absolute poem” is always still out there.

Over the years, each issue of Azalea has brought together a remarkably wide range of literary and visual artwork from “out there.” The International Communication Foundation (Seoul), has shared our vision for what translating and publishing Korean literature can accomplish. I note their support with gratitude. I note also with thanks the Korean Literature Translation Institute’s encouragement and financial support over the years, and with regret, the conclusion of that support with our previous issue, Volume Six.

As we all go forward, I express the confident hope that many readers will enjoy the materials gathered in this issue. May teachers find examples of forms, voices, and subjects which they can use in their classrooms to bring students toward a deeper understanding and appreciation of Korean literature, from present-day to historical, and from what is made in Korea in the Korean language, all the way to works written in English in the U.S.

May you feel inspired, as I have been, to follow the paths that open.

David R. McCann is the Korea Foundation Professor of Korean Literature at Harvard University. He is the recipient of numerous prizes, grants, and fellowships, including the Order of Cultural Merit award (2006), one of the highest decorations by the Korean government, and the Manhae Prize in Arts and Sciences (2004). Not only a renowned translator of major Korean poets but also a recognized poet, he has published his own poems in such distinguished journals as Poetry, Ploughshares, Descant, and Runes. Urban Temple, a collection of his sijo poems, a Korean verse form, was published in 2010 by Bo-Leaf Press, with a Korean-English version from Changbi Publications in 2012.